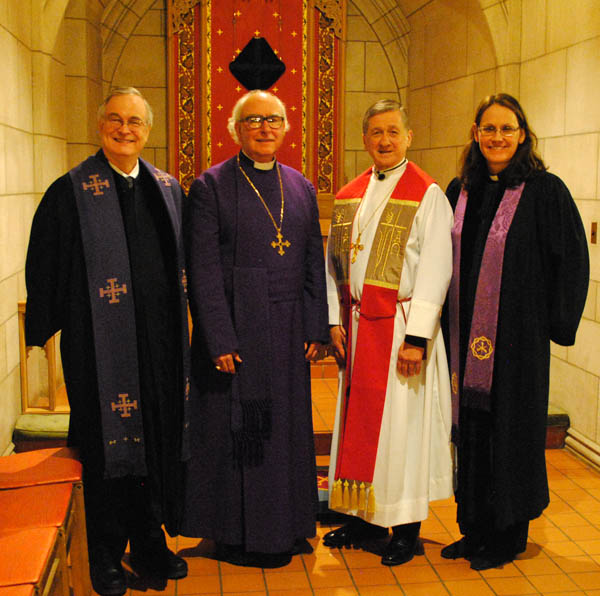 The nave of the Cathedral of St. John the Evangelist grew dark with shadows of betrayal, abandonment, and anguish Friday night as Christians gathered to remember the crucifixion of Jesus, and the events leading to his death.

For the fourth year in a row, local faith leaders came together to lead a Good Friday Ecumenical Tenebrae Service.

“One thing that holds us all together is our conviction that Christ’s death is deeply meaningful,” said the Rev. Dale Cockrum, Inland District superintendent of the Pacific Northwest Conference of the United Methodist Church. “It binds us together.”

Cockrum shared in the Good Friday readings with Rev. Sheryl Kinder-Pyle, executive presbyter of the Presbytery of the Inland Northwest, Bishop Blase Cupich of the Catholic Diocese of Spokane and Bishop James Waggoner of the Episcopal Diocese of Spokane.

It’s traditional in Tenebrae services for candles to be extinguished between narrative Scripture readings, slowly dimming the church. Candles are quenched until only one remains — the Christ Candle. When this candle is taken away, the congregation makes loud noise by stomping feet or beating on hymnals to symbolize the mayhem that followed Jesus’ death. The Christ Candle is then brought back as a sign of the resurrection. The sanctuary remains dark and worshipers leave in silence, since the story isn’t over until Easter Sunday.

Waggoner said the service being lead by local leaders from different denominations is a timely and visible message of Christian unity.

Cupich agreed, adding that among Christian relationships there are moments of shadows and light, similar to what was witnessed at the Tenebrae service.

“Shadows imply division, lack of unity, and I believe Christ wants us to be one light,” he said.

That light, he added, comes in the form of God’s love.

This was the first time the service was held at St. John’s. In previous years it was hosted at Our Lady of Lourdes Cathedral. Faith leaders said they hope the ecumenical service will continue in years to come.

Previous Meat & Potatoes: The best and worst of Christian history
Next 042114 quote