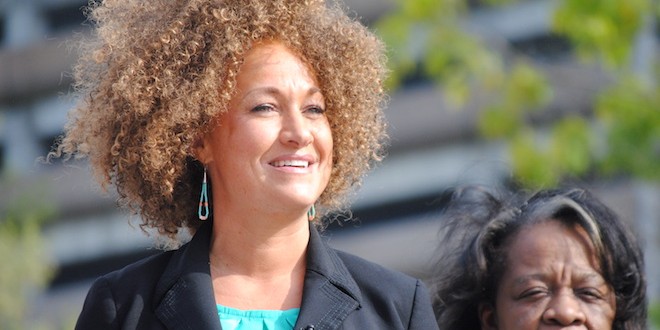 Dolezal accusations prompt question, “What does good parenting look like?”

Parenting is hard. Parenting in the 21st century is scary. Parenting in the media is awful. Recently, media outlets have been flooded with issues of parenting; there’s the “free-range” parents, the conservative Christian parents, and now questions about the parents and parenting of Rachel Dolezal.

The free-range parents come under fire for giving their children expansive amounts of freedom, allowing them to walk over a mile to and from a local park without supervision. For this, the media vilified them. Most school bus systems require that a child live over two miles from school before allowing them to ride the school bus, so why are these parents subject to such harsh criticism for doing what many local school systems do?  If a kid can walk two miles to school, and I think that all children ought to be able to walk that far, then why did they parents get fried by America media outlets for allowing their kids to walk that far to the park?

The Duggars, on the other hand, knew their child had committed a very serious crime, and yet they (who have their own TV show about how wonderful their family is) hid this information from view, did not take the kid to counseling or to treatment, causing a firestorm of articles across America. Despite this criminal behavior, there are thousands who still hold the Duggars up as models of good parenting.

Now, in Spokane, we have a situation developing around Rachel Dolezal, with accusations and allegations coming from all sides, and topping off the horrid comments are the statements made by Dolezal’s “parents.” I use quotes around that word because biology doesn’t necessarily make you a parent, let alone a good one. I can’t begin to imagine the thought process of a these people, who would throw their own child under the bus of public criticism, all the while painting themselves as paragons of parenting virtue.

Who gets to decide what “good” parenting looks like? SpokaneFAVS recently held a Coffee Talk forum on parenting, and the articles that were written covered the gamut of family situations. Andrea CastroLang wrote about grandparenting, while Charlie Byers, brand-new dad, wrote about that. Eric Blauer wrote about fatherhood, and Emily Geddes wrote about being mom. Following that, we held a Pub Talk to further discuss how our  individual belief systems inform our parenting styles. This conversation quickly went into a discussion of how our parents raised us, and how, when, and from whom, we grew in our understanding of God. In almost every case, it was either from parents or grandparents. It was not only the information about God that we learned from our parents, it was their behavior and influence from which we gained our image of who God is. If we used this example in the Dolezal case, our image of God would be a god who pats themselves on the back while watching our kid’s pain. This is NOT the God I serve!

There are as many different kinds of families as there are people in the world, and no family system or set up is perfect because people are not perfect. Dolezal has been raising her adopted brother as her son, as a single mom, and he is a standout young man. What about that situation can be criticized? In my own family, there is a grandson being raised as a son, and he is lucky to have such wonderful, selfless people in his life. Who is to say whether a child is a son, grandson, or brother? Or what he should call the people who raise him? All over the world, people are parenting across generational and familial lines. As long as the children are healthy and well, why demand full disclosure on the bloodlines?

There is no perfect parent, and I have stated some of my opinions on parenting here in this article, but we/I must always remember that we do not have all the facts. When a public person comes under fire, it’s easy to jump on the Comment Train and run them over. It’s easy to point fingers and call into question the behavior of other people, especially in a public forum, but as always I think the Golden Rule should be applied; if you would not want someone looking into your past or inside the windows of your house, then don’t do it to others.

Previous Audio of Dolezal on panel discussing racism, prejudice
Next 5 faith facts about Jeb Bush: Catholicism ‘resonated with me’