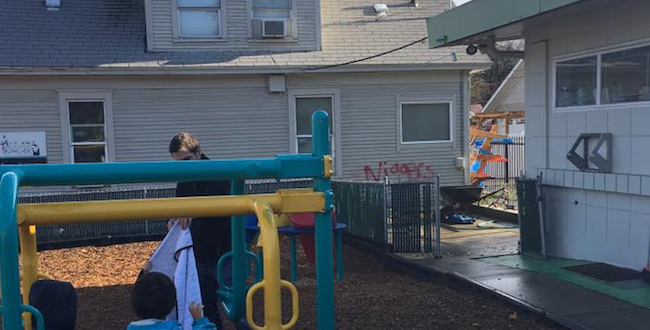 More than 200 people gathered at the Martin Luther King Jr. Family Outreach Center Tuesday after racial slurs were painted on one of the organization’s vans and on the side of a building. After a group prayer and a welcome from center director Freda

“The outpouring of community support for the Martin Luther King, Jr. Family Outreach Center today was remarkable, humbling and exemplified everything that is right about Spokane. To see more than 100 people assemble with very short notice to stand with the Martin Luther King Jr. Center staff and the families they serve sent a strong, clear and undeniable message that hate will not be tolerated in our community. Not today. Not ever,” Condon said in a statement released Tuesday.

“This type of hate will not be tolerated here,” Gandy said as she greeted the crowd. “We have children here. Children of all races. They should feel safe.”

Gandy said she reported the event to the police, who canvassed the neighborhood but found no leads. The center does not have surveillance cameras.

“I’m asking the community to stand with us against this hate,” she said. “If you see something, report it.”

Spokane NAACP President Phil Tyler said the incident galvanized him, but it wasn’t as shocking to him as it was to many in attendance. “[Racism] is not a relic of the distant past,” he said. “It is not confined to the deep South.”

Previous Soulless Nation, turn to the Bible
Next A Day In The Life Of An Ally At Standing Rock