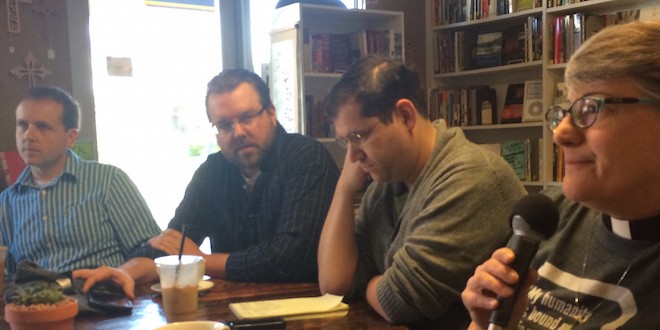 Panelists at the May Coffee Talk, 2015/Tracy Simmons - SpokaneFAVS

Thanks for a great Coffee Talk today everyone!

It was a smaller group than usual, with about 20 people in attendance, but it was fruitful conversation and we raised about $100 for SpokaneFAVS.

The discussion was also live streamed on Twitter for the first time (@SpokaneFAVS) and about 15 people tuned in.

See you for our next Coffee Talk on June 6 for a forum on Parenting.

Other panelists are FAVS writers Pastor Jan Shannon, who wrote, “RFRA Laws Are Like a Bad Bra“ and Neal Schindler who wrote, “Agreement isn’t in the cards, but empathy should be“ and “RFRAs, false victimhood, and the “ick” factor.”

All are welcome.
[wp_paypal_payment]

Previous Maryland bishop charged in DUI death is defrocked by Episcopal Church
Next Teachings that Disempower and Infantilize Spirituality, Part 1