Gender & Spirituality was the topic of the March 2013 Coffee Talk.

Gender & Spirituality was the topic of the March 2013 Coffee Talk. Related posts are below. 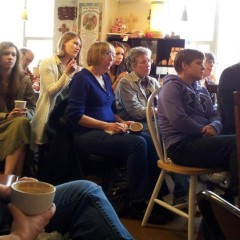 “So when are you going to get married?”

“The importance of feminine wisdom”

When I look at the luminaries, from Emma Curtis Hopkins and Myrtle Fillmore to Louise Hay and Jean Houston, who have been an integral part of both the New Thought Movement and the development of Centers for Spiritual Living, I recognize that without them there may not have been a New Thought movement at all. Read more.

“The author of life is neither male nor female”

I was seven months pregnant the day I was ordained. Read more.

“Deconstructing gendered language and its effects on the church”

Given the tenuous, occasionally contentious nature of conversation, the massive number of people willing to continually engage in issues is inspiring. Read more.