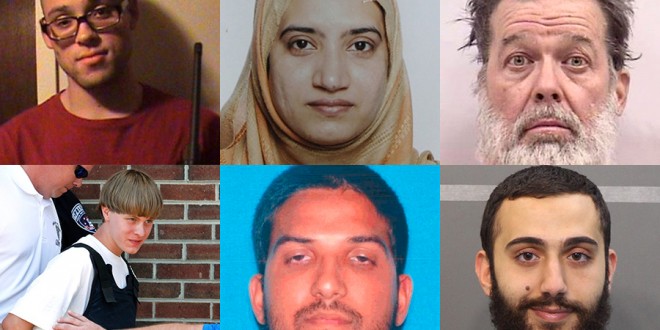 (RNS) Terrorism and mass shootings trouble an overwhelming number of Americans today, and the religious identity of the killers influences how they are viewed.

A new survey, conducted in the aftermath of the San Bernardino, Calif., killings by two radical Muslims, found that 96 percent of U.S. adults see terrorism as a critical issue or an important concern.

Mass shootings also are a critical or important issue for 94 percent of Americans, according to the Public Religion Research Institute/Religion News Service poll. And they take this fear personally:

“The fear level seems terribly high given the actual likelihood of this happening to an individual. That speaks to the deep-seated feelings of anxiety that people have and their response to some of the current, heated political rhetoric,” said Cox.

Muslims are the focus of the hottest news — and some of the ugliest political rhetoric — right now.

The FBI describes the California shooters, Tashfeen Malik and Syed Rizwan Farook, as ISIS-radicalized Muslims out to terrorize the United States by mowing down Farook’s co-workers.

GOP presidential contender Donald Trump, whose call for a ban on allowing Muslims to enter the U.S. came after the survey was conducted, has fulminated for weeks against allowing Syrian refugees into the U.S.

And his rival Ben Carson has said Islam is not in accord with American values.

The PRRI/RNS survey found this rhetorical climate might have influenced views on whether American Muslims are seen as “an important part of the U.S. religious community.”

Overall, 57 percent of Americans say yes, they are. However, views on the virtue of such diversity vary by religious identification — and by how personally afraid of terrorism someone feels.

Those who see Muslims as important to U.S. religious life include:

Jews, Muslims and other minority religious groups were too small to be analyzed in statistical comparisons. The survey’s results are based on phone interviews with 1,003 adults, conducted Dec. 2-6. The margin of error is plus or minus 3.7 percentage points overall but larger for subgroups.

“Despite the heated rhetoric we are hearing from people like Donald Trump,” Cox said, “the majority of the public (53 percent) are in favor of letting Syrian refugees come to the U.S. if they go through stringent security checking.” Among those who oppose this, a majority (57 percent) cited security fears.

Fewer than half of Protestants — whether they are white or black, evangelical or mainline — say they support U.S. entry for Syrian refugees. By contrast, 57 percent of Catholics and 60 percent of those who claim no religious identification favor such resettlement.

The statistics do reveal some dissonance.

Most Americans (83 percent) say they know little or nothing about the religious practices and beliefs of Muslims. And 62 percent say they seldom or never have conversations with anyone they know to be Muslim.

Even so, 47 percent overall say they believe the values of Islam are at odds with American values and way of life. More than 4 in 10 (43 percent) disagree, while 1 in 10 (10 percent) offer no opinion or refuse to answer.

And a majority (53 percent) said Muslims have not done enough to combat extremism in their own communities. In 2011, only 46 percent held this view.

The survey also suggests a double standard in American attitudes toward violence, one based on a killer’s religious identity.

Three in 4 (75 percent) say self-identified Christians who “commit acts of violence in the name of Christianity are not really Christian.”

But only 50 percent say self-proclaimed Muslims who commit violent acts in the name of Islam “are not really Muslim.”

Previous Pub Talk: The Changing Religious Landscape
Next Surprise, surprise! God knows more than I do