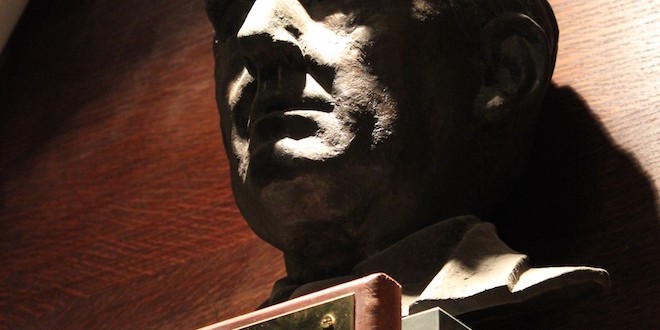 Bust of Tolkien in the chapel of Exeter College, Oxford/Flickr photo by Julian Nitzsche

“I despise the kind of book which tells you how to live, how to make yourself happy! Philosophers have no good news for you at this level! I believe the first duty of philosophy is making you understand what deep shit you are in!”

-Slavoj Žižek
Sometimes when I read parenting advice, I tend to be overcome by my dark philosopher side and I find myself channeling quotes like Slavoj’s but that’s probably because I am neck-deep in parenting my last child at home — a 100 percent ‘grade A’ 15-year-old teenager. Thankfully I also have a theologian side that is rooted in a hope that is greater than my own family history and fears of the future.
I am a child of divorce, my family had a nuclear explosion when I was 11 years old. My wife’s parents were pastors all her life and are still together having raised four kids of their own. My wife was from one side of the tracks and I crawled over to her from the other. My wife has stewed up and dropped out four humans, all while I watched in horror and wonder. All our children we planned and they will all still own us if asked.
Both of us are Evangelical Christians and pastor a church of Wildings and Wisefolk. I say this to either give you a reason to stop reading or a little familiarity to continue.
As former youth pastor of a decade plus, I witnessed a wide variety of parenting styles that ranged from free range parenting to Gestapo paranoia parenting. I think I was more worried about the prospect of raising kids than I was marriage. The idea of the God of the universe dropping a gaggle of screaming, pooping, breast stealers into my life without a manual was frightening.
It has turned out to be more harrowing and holy than I had ever imagined.
Two texts have been central to my parenting indoctrination:
I am not sure which has been quoted more from my lips to be honest. The reason behind this odd combination is that I survived a horrific number or years emerging from a divorce meltdown as a child through my escape to Middle Earth. It’s stories became my road map from the edenic Shire to Mount Doom and as Bilbo so eloquently penned…and back again.
Many of my most impressionable childhood summers were spent with my grandparents in the mountains outside of Boise, Idaho. Their hand-hewn log home even had an actual rock castle turret, it was a haven of boyhood magic. For me it became an iconic place that I rediscovered in Tolkien’s writings and hoped to pass on to my own kids.

“His (Elrond) house was perfect, whether you liked food, or sleep, or work, or story telling, or singing, or just sitting and thinking best, or a pleasant mixture of them all. Evil things did not come into that valley. I wish I had time to tell you even a few of the tales or one or two of the songs that they heard in that house. All of them, the ponies as well, grew refreshed and strong in a few days there. Their clothes were mended as well as their bruises, their tempers and their hopes. their bags were filled with provisions light to carry but strong to bring them over the mountain passes. Their plans were improved with best advice.” -The Hobbit, JRR Tolkien

These words and memories became my own self-spun fantasy of family, but little did I know just how real the orcs, dragons and powers of darkness would be part of our story too. Every Eden has a snake and every story an arch of evil to overcome. Tragedy and triumph are human narratives based on reality not fantasy and parenting will be the frontline for many of those stories.
As a Christian, I believe in passing on a Christian view of reality, faith in Christ and the values that guide such a life. This has been one of the most important parenting commitments and goals of my life.
Of late there have been some recent studies that have highlighted the the success and struggle of such an endeavor.
“Evangelicals retain two-thirds of their children, placing fifth among all religious groups and second among Christian groups. By comparison, Protestants at large retain less than half of their children.
Overall, about half of Americans raised as Protestants remain in their childhood denominational family (47%). About one-quarter now identify with a different Protestant group (27%), while 3 percent became Catholic, 4 percent became non-Christians, and 19 percent became unaffiliated.”
As a father, my role has also been highlighted as an essential part of passing on the faith:
“For young adults from Evangelical families, 71 percent of those who had a close relationship with their father shared that Evangelical faith, compared with only 46 percent of those who did not have a close relationship with their father. While this is only one study, these findings are certainly worth wondering about.”
These statistics don’t always encourage me, but I also turn to the Bible and have often prayed the passages, claiming their promises and pouring my heart out to God for my kids and their kids, kids. I am connected to a faith that has often defined itself by the God of one’s fathers.
Genesis 17:7
“I will confirm my covenant with you and your descendants after you, from generation to generation. This is the everlasting covenant: I will always be your God and the God of your descendants after you.”
Isaiah 44:3b-4
“And I will pour out my Spirit on your descendants, and my blessing on your children.
They will thrive like watered grass, like willows on a riverbank.”
Psalm 22:30-31
“Our children will serve Him; future generations will hear the story of how the Lord rescued us. They will tell the generations to come of the righteousness of the Lord, of what He has done.”
There have been many moments in our parenting life where we wished we could stare into Tolkien’s Palantír or Galadriel’s fountain to see the future or gain some wisdom that seemed beyond us but in the end we have had to trust in faith, the love of our home, the support of family, the sustaining reality and enlightenment of prayer and stories both secular and sacred.
Hopefully that will be enough.
“’Tell me,’ he said, ‘is there any hope? For Frodo, I mean; or at least mostly for Frodo.’

Gandalf put his hand on Pippin’s head. ‘There never was much hope,’ he answered. ‘Just a fool’s hope, as I have been told.” -J.R.R. Tolkien, The Return of the King

Join SpokaneFAVS for a Coffee Talk forum on “Faith and Parenting” at 10 a.m. June 6 at Indaba Coffee/The Book Parlor, 1425 W. Broadway. Blauer is a panelist.